Tuning into video games streams through Twitch and other streaming services has become as common, for some, as tuning into cable television. In 2016, the act of filming, post production work, and sometimes hours of recording commentary has become a daily task for streamers attempting to develop content that marks them as unique amongst the swarms of new streaming personalities. “Let’s Play’ has dominated the vocabulary surrounding this culture ever since it was first used to label the videos series on the Something Awful website in 2007.

Well, it would seem that Sony Computer Entertainment has new plans in 2016 for the coined phrase. A user on a popular gaming forum, NeoGAF, noticed the trademark and made the post early on January 8 detailing the few known facts, most of which can be seen by viewing the trademark details page available on Justia, a website dedicated to all sorts of legal information management. 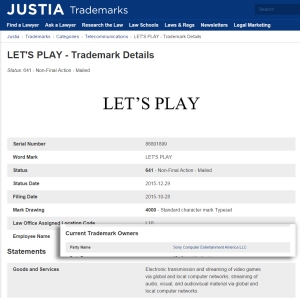 While there’s no reason to scream “Foul Play” just yet, it does raise the question of just how internet streaming culture may change in 2016. More information will, surely, pop up in days to come.

One thought on “Did Sony Just Trademark “Let’s Play”?”