After nearly ten years in development, SCEJ’s Team Ico can finally rest. Their newest title, The Last Guardian, exhibits mastery of their craft spanning from subtlety in storytelling, visual direction, to an understanding of scale manifesting masterful level design. They manage to coalesce these principles together to nurture an unlikely relationship, delivering a narrative that reminds us why Team Ico holds their distinguished reputation.

The introduction to The Last Guardian holds true to the Team Ico experience for those familiar. The brief opening establishing only a cryptic sense of place, the story is expected to unfold organically through exploration. Lack of information is intentional as the scope draws in with a fine lens, focusing tightly around its antagonist, a young boy, and his interactions with a wounded Trico — a giant horned dog-like creature with the talons and feathers of a bird, long hairy tail of a rat, and quick reflexes and agility of a cat.

Volatile but in need of care, the allure of this magnificent creature washes over the player as his whimpers of agony coax you to his aid, bringing this vulnerable young boy to his side and creating a cautious affection in the player.

Is This Love, That I’m Feeling?

As Trico recovers, his hesitance towards the boy wears off and his appreciation begins to show. His excitement when brought food is akin to feeding time at any household with pets and his agony in dire times brings you to forget that he is simply a marvel of art and programming. Trico comes to life. More than a pet, he is a companion who relies upon the boy as much as the boy relies upon Trico.

Throughout their journey, archaic evil intent on preventing Trico and the boy’s escape creates peril at every chance. Mysterious stained-glass displays induce fear in Trico and prevent his moving forward while suits of armor spring to life to drag the boy through arcane doorways to another realm. While these definitely create tension, the real challenge for the duo will be escaping the ruins surrounding them. 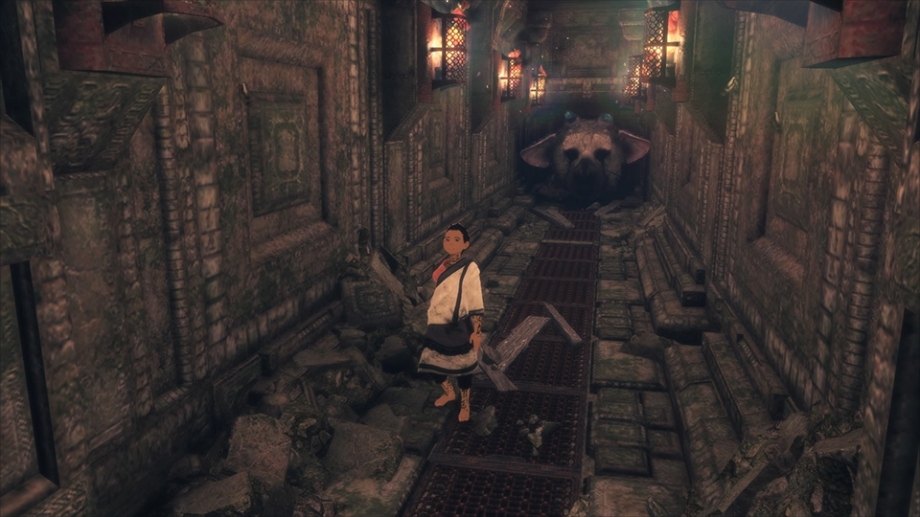 Packed with crumbling narrow corridors and extravagant temples, the environment occasionally forces the boy to separate from Trico, usually to access a lever from the other side of a door, allowing Trico to progress. Navigating away from your friend leaves you feeling vulnerable and longing for that comfortable safety which is, in turn, satisfied when the gate creaks open and though it prances Trico, equally thrilled about your reunion. On the other hand, the boy depends on Trico in a similar way. Claustrophobic tunnels open into immense open spaces. The boy becomes dwarfed by the scenery, but not with Trico at his side.

Behind the scenes of this thoughtful narrative is a backbone of masterful level design that marvels in the contrast of the varying scales. In between traps and enemy interactions, comforting breaths of elegance appear as the scenery opens to the player but the scale of the world soon transforms into more than simple scenic grandeur. The ruins can only be navigated if both work together exploring not only the minuscule, but also the massive. Beyond enforcing a communication that brings purpose to the unlikely bond between the two, this transition in scale in these environmental puzzles is the area in which we see Team Ico’s signature.

Some of the more thrilling moments in The Last Guardian come from discovering that, upon Trico’s back, ledges and towers that felt like set dressing are now reachable. What would likely have been merely vistas in other titles are actually entry points for some massively scaled Trico platforming. Hopping onto the giant’s back, he’s even excited to show where he can take you. The realization that you now must think bigger than the typical human scale of games is what makes The Last Guardian special. This design creates the problem for which the boy and Trico must depend on each other should they find a solution; the trade of responsibility the catalyst for their growing relationship.

As magnificent as the scenery, storytelling, and level design may be, every relationship has its ups and downs and occasionally Trico can become downright insufferable. When Trico understands commands the feelings of progression are flawless in The Last Guardian. The solution should only take as long as it takes the player to discover it and execute. It’s that whole execution thing that Trico can get hung up on.

When Trico gets confused, sometimes disinterestedly glancing towards commands and other times pacing like a dog that needs to be let outside, it’s easy to ponder over some of the creative choices. Is this masterful or just bad? Is Trico acting as a willful, wild animal that is unsure about the commands being given by his new friend or is the AI just completely baffled by my input? His reactions are such that, for the most part, it seemed intentional. So, I went with that. That said, landing on the conclusion that Trico was confused by the boys commands certainly added an entertaining context but only mildly fixed the issue.

While it became possible to internalize it as part of the structure, the frustration of understanding a solution but failing to execute eight times in a row remained just that — frustrating. Throw in clunky camera controls and you’ve found the formula for moments of madness — the unfortunate sole detracting factor from The Last Guardian‘s overall quality.

An Intersection of Masterful Design and SO Much Time

Masters of subtle storytelling, Team Ico manages to create and nurture a bond by focusing their narrative through the lens of exquisite level design intended to create a back and forth between Trico and the young boy. Struggling with adversity both big and small, their implausible friendship transforms as their trust in each other builds. The Last Guardian plays with empathy and simultaneously reminds us that when unlikely allies come together in the face of misfortune that we are stronger and we can accomplish more.

Though flawed in some technical respects, it uses both visual and level design to create a thoughtful and profound narrative experience that stands alongside the best in the industry, but is unparalleled in tone and means of delivery.

Want to see a little of how the sausage is made? This copy is my personal draft (heavily edited only by myself). Editors change the feel of a piece in an intriguing way, especially when the have an expected tone for their established publication. I posted this copy before my editor got around to publishing the review and I had the idea: Maybe I leave this here and sport a link to the copy over at DoomRocket. SO, if you happen to be curious about the effect an editor can have on copy, head over there and read the DoomRocket review for The Last Guardian. It’s only slightly different but I always find the changes interesting.